Time for some needed R&R. I took a trip out to the Whiteshell yesterday and hiked MgGillvary Falls. It was a beautiful hike, and only saw 2 other people the whole time out there. It wasn’t what I would call an easy walk carrying my camera gear, but manageable, and the weather complied which was great!!

Finally experiencing some decent weather here in Winnipeg and decided to use it to full advantage. Packed up the gear and headed out to Gimli with my buddy Mark and his son Dylan to catch some racing action. Our first stop was at the Karting track for the Manitoba Karting Association.

There was some great action and some good photo ops. Fortunately since Dylan raced last year sponsored by the Canadian Museum for Human Rights, and Mark helped out at the track he was able to get us inside the track area to get up close and personal to the action. 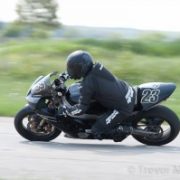 So from the karting races we made our way back out to the highway and up the road to the other end of the field where my buddy AJ was racing his 600cc bike in the MRA Superbike races. While the bikes are topping out around 250 kph, the speed is somewhat deceiving.

We arrived just in time for the afternoon break and hit the pits. AJ was just in the middle of trying to frantically solve a leak in the front breaks in time to hit the polls for the next race. So as he ‘solved’ the problem (as much as you ever solve a problem in pit row) Mark, Dylan and I headed out to pick a spot to shoot the bikers as they raced.

While we were successful in finding a spot to shoot from AJ wasn’t as successful in finishing the race. On the last lap an aggressive passing maneuver led unscheduled exit off the track at 180 kph. After a lucky miss of the tire barricades and a gentle putting down of the bike prior to hitting the ditch no ‘serious’ damage was done!